Pruitt Baptist Church was organized in the summer of 1896 and the first building was erected in 1912. In the beginning, church meetings were held once a month in the Congregationalist Church. When the Methodist Church was built, Pruitt met twice monthly there. When Pruitt Missionary Baptist built their first building, Bro. T.M. Post was already pastor, but came only once a month as a circuit preacher. So when the Methodist had services, Pruitt worshiped with them, and when Pruitt had services, the Methodist worshiped with them. Mrs. Carrie York was the last charter member, she died in 1979. The first deacons of the church were E.R. Crocker, A.B. Cade, C.A. Gillentine, W.M. King, Charley Gillentine and Milton Hill. Membership was small in the beginning with some 20 families, but each year the membership list grew. Mrs. Lula G. Hill was the church clerk and treasurer for a great number of years. While hearing the reading of the minutes she kept, you felt as though you were there. It was quite interesting to read and note that every member was referred to as a sister or brother. Business meetings were held on Sundays after church, because of the limited time of the farmer, transportation, and no mid week services.

It was also interesting to note that these farm families gave of what they had. Monthly, they brought their money. Some giving $.50, $1.00, $2.00 or $5.00. Some of these farmers would allow Mrs. Hill to write down their names & donation amounts. In the summer, they added to their money donations the following: bushel of peas, potatoes, corn, and a chicken. A quilt that Sister Morpheme made or a sheet that Sister Galantine made. It was most important to them that the care and feeding of the pastor was clone to the best of their abilities. According to the minutes of April 13, 1947, land was donated by Surrey and Margaret Ray to Pruitt Baptist Church for the move of the building to Hwy 110 when the church saw fit. On June 16, 1947, that building was moved to the present location. 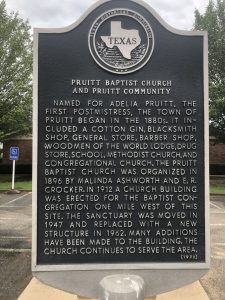 July 4, 1948 (Church Minutes) Pruitt Baptist Church met in conference Sunday night July 4th for the purpose of calling a pastor. The visiting preacher James R. Leitch was nominated. There being no other nominations, a motion was made that 11ominations cease. Moderator, H.J. Ray called for a vote on Bro. Leitch. The result being unanimous to call Bro. James R. Leitch as Pastor. Conference adjourned. H.J. Ray. Moderator Una Brannon, Church Clerk. In the beginning, services were being held twice a month when Bro. Jimmy was there. Then, in April 1950, our church went to a full month of Sunday service. Bro. Jimmy held a position at the Southern Baptist Seminary in Ft. Worth and he and Lib would drive dom1 each Saturday. Then, they would return home each Sunday night to Ft. Worth. Bro. Jimmy had the vision of Pruitt’s growth, and remembering back to sermons, they were God inspired. Most would remember the voice and the dynamic way he had of speaking. It just demanded you to listen. He loved children, and storytelling in Sunday school or Bible School (when possible for him to attend), was a treat. There have been many storms, valleys, & hardships “within the body of Christ that is called Pruitt Baptist Church. This is just as it should be, since there will be no perfect church on earth. Throughout the New Testament, Paul gave instructions t9 several new churches that needed guidance. Praise God, we have His inspired “WORD” to encourage us, as we face problems similar to theirs. There have been many changes since we met for our centennial in 1996 including three major building projects to remodel and enlarge the facilities. The project to enlarge the Sunday School Building was first. Then we proceeded to renovate the auditorium, which was dedicated October 29, 2000. Finally, the Family Life Building was enlarged to accommodate the growing attendance. And the best part is, all of this was done debt free because, just like in the past, the majority of the work was accomplished through the volunteer labor of the Pruitt Family.

Thanks for visiting Pruitt Baptist Church. Whether you are just checking out PBC or you’ve been a part of our community for 50 years we hope you find what you need here. If not, please don’t hesitate to contact us.